With the launch of Ponyville in August of 2015, several users saw this as an opportunity to push the new chan onto a revolutionary line. In an attempt to recruit GETchanners to the cause, the RFP made GETchan its base of operations, which ended up having the adverse effect. In the end, through the efforts of GETchan's staff and Moony's popularity on Ponyville, the insurgent group eventually went underground. By 2016 the RFP had seemingly become defunct, though it in fact continued to operate in secret on a smaller scale with sporadic campaigns onto Ponyville's main board. In 2019, the image of the RFP was rehabilitated on GETchan and a selectable flag was added for the RFP on /GET/, with elements of the group resuming activity on the board. Comrade King, one of the two co-administrators of GETchan, has described his initial opposition to the RFP as "one of [his] biggest regrets in [his] time running GETchan".

As tensions on Bunkerchan reached their breaking point in 2020 and the GETchan Liberation Front was formed by users critical of the Bunkerchan staff, the remnants of the RFP put their support behind the new group, calling their struggle "one and the same". By late December, the objective of a newly independent GETchan had been fully realized and the GLF and RFP released a joint statement announcing the formal demobilization of both groups, stating "the GLF has served its purpose and the cause of the RFP seems to be wholly out-of-reach". The two groups officially ceased to exist on January 1 2021, and with the end of the RFP so did any remaining opposition to Moony's administration.

The official anthem of the RFP was the March of the RFP. The lyrics to the anthem can be found below.

For the justice of all, we have answered the call
For the ousting of dictator Moony!
For a future of peace, love and tolerance must cease,
Those ideals of a despot and loony!
Now the great people's dream ends the brutal regime
With support from the whole of the chanverse!
And our future will come once we vanquish the scum,
We the people are ending the curse! 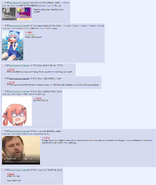 A look at your average RFP thread
Add a photo to this gallery
Retrieved from "https://unitedchans.fandom.com/wiki/Revolutionary_Front_of_Ponyville?oldid=6003"
Community content is available under CC-BY-SA unless otherwise noted.