Start a Wiki
A GET, as defined by PonyGET, is an attempt at guessing a certain element of one's own post, usually involving the post number in some manner. Both Dubschan and GETchan have an affinity for GETs, with the former having every post end in doubles.

When asked where GETs originated from, people often claim that they originated from 4chan. This is actually incorrect. GETs have existed since the conception of chans. While our current concept of a GET is very different from what they used to be, the ideas are essentially the same. The changes made in GETs over the years can be seen as a sort of evolution. From the original GETs, to the GETs we know today, to the fairly recent "GET Battles", many changes have been made to GETs since the beginning of their existence. Though GET history had not been recorded until around 2007, GETs from before are still remembered by many, and some evidence of them still exists. Some of the GETters of today are also educated in the subject of GET history, thus the memory of these old GETs still exists in them.

GETs originated on 2chan, the first chan. However, those familiar with chan history would know that 2chan began not as an imageboard, but as a text board. Text boards work quite differently than imageboards when it comes to post numbers. On text boards, every thread has its own post numbers, with the OP starting as 1, and consecutive posts ranging from 2 to 1,000, where no more posts are allowed in the thread. But how did GETs work in a situation like this? Easy. People would try to get a certain number, just like they do nowadays, while proclaiming "GET!" The most desirable numbers were 2 and 1,000, the first and last posts in the thread, respectively. Though this seems extremely simple compared to what we have now, this was just the beginning. With the invention of imageboards with constantly increasing post numbers, our current concept was born. The old version of GETs was split in two different games. The first game is obviously our current version of GETs, and the other one is also very common, even on non-chan websites. This is the game of First, where the goal is to be the first to post in a given topic, thread, or just about anywhere, really. GETs took the timing and post number factors with it, while First took the factor of trying to be the fastest at something, and they became different games. Today, both games have spread throughout the internet, with GETs being extremely popular on chans and First being popular on forums and the like. Unlike First, though, GETs would undergo many changes and become somewhat of a culture.

When 4chan was created to be an English equivalent of 2chan, GETs came along with it. However, the concept of GETs at the time was a bit different from ours. Doubles and such were popular mostly for rolling games, but people usually would not attempt to get repeating digits otherwise. The only occasion in which people would rush to get a certain post number was for a Million GET, a sextuplet GET with six zeroes. Million GETs were seen as the only true GETs, and all others were nothing of value. Even the sextuplet nines before the Million GET were seen as a failure. This tradition carried on for four years on 4chan’s /b/ board, the only board in which they were popular, due to /b/ being one of the only boards to have post numbers high enough for million GETs, and the fact that people, at the time, were generally not interested in GETs on other boards. However, both the Million GET tradition and the containment of GETs in /b/ would change in 2007, with a revolutionary leader by the name of 4chan's King of GETs.

Various other types of GETs: 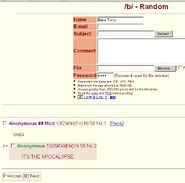 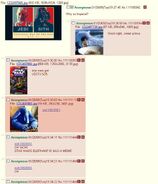 Nulchan's first octuplets
Add a photo to this gallery
Retrieved from "https://unitedchans.fandom.com/wiki/GETs?oldid=5439"
Community content is available under CC-BY-SA unless otherwise noted.