The conflict originated with the deletion of /ef/ from Ponychan. The regular posters of /ef/ declared themselves r/ef/ugees and attempted to seek refuge in GETchan, as well as other chans. Due to the fact that the r/ef/ugees outnumbered the GETchanners, many GETchanners were afraid that the r/ef/ugees would turn their chan into a second /ef/. Due to this, hostility began to grow between the two groups until efchan was founded and the r/ef/ugees left.

There was little interaction between the two chans until the founding of the United Chans. When the United Chans was still in the planning stage, GETchan and Lunachan wanted efchan to be the third founding member due to its involvement in the original thread that sparked the idea. However, efchan refused this offer. To this day, efchan remains the sole chan to refuse an invitation to join the United Chans. Instead, MLPchan volunteered to become the third founding member. The United Chans was created along the Lunachan Pact, a socialist alliance between the three chans. As per the Lunachan Pact's requirements, MLPchan began to stand by GETchan's side in minor conflicts between GETchan and efchan.

Later in the year, efchanners began to flood into GETchan once again. Disliking that these posters continued to disregard GETchan's policies, the GETchanners began to regard these posters with resentment. Relations between the two chans began to rapidly decline from this point forward. Eventually the conflict was declared to be a cold war by both sides on 14 November, 2012. Following the Lunachan Pact's requirements once again, MLPchan quickly took GETchan's side. Relations hit an all-time low when GETchan began banning efchan-related activity. This banning lasted for a month before the rule was lifted. During this time, however, some users that visited both chans saw fit to choose sides. Some users left one chan for the other permanently. After months of fighting, MLPchan left the Lunachan Pact, leading to its dissolution.

As Oniichan rose, GETchan shifted its focus to Oniichan instead of efchan. However, tensions began to rise between GETchan and efchan again in March of 2014, when GETchan began to get an influx of users that were banned from efchan. The staff of efchan attempted to convince GETchanners that the users should be banned on GETchan as well, unaware of GETchan's no-ban policy that it adopted from NoBanchan. This move was met with severe condemnation from the interchan community, notably from GETchan, efchan, Lunachan, and /ref/.

Seemingly with a change of heart, efchan's admin, Black Butterfly, requested that efchan join the United Chans on 5 May, 2014. With their only request fulfilled, GETchan called for an end to all hostilities against efchan. Relations remain tense due to the ideological differences between GETchan and efchan, but both chans are taking steps to building strong ties.

Not long after the dissolution of the Lunachan Pact, GETchan received a 504 error that was deemed unfixable by half of GETchan's staff. These staff members left to create a new GETchan, while GETchan's original staff stayed to try and fix the problem. Though the staff did get GETchan back up and running, the other staff had already created a new chan. This led to a disagreement on how to manage reunification. The staff of both chans argued over which of the two chans deserved to continue its existence. The staff of the old GETchan claimed that, being the original, it was the true GETchan. The staff of the new GETchan claimed their chan to be superior to the old one, and therefore deserving to replace the old one. No agreement was made and the two chans remained split.

Soon the new GETchan decided to seek its own identity and it adopted the name "Oniichan". Upon gaining its new identity, Oniichan attempted to form ties with efchan. GETchan then declared that upon making these attempts, Oniichan was now its enemy. Though GETchan was restored, it was restored to a much earlier date than when it had gone down. Oniichan used this to its advantage, stating that it would be impossible for GETchan to be completely restored. While GETchan slowed to a halt, Oniichan continued to grow. The conflict continued this way with constant clashes between the staffs for about five months until GETchan was fully restored. During this time, GETchan found two allies in /ref/ and Dubschan. Once restored, all the traffic that had gone to Oniichan shifted back to GETchan. Now Oniichan was the one struggling with traffic.

Soon afterwards Nuchan decided to raid Dubschan, GETchan, and Oniichan. The raids on GETchan and Dubschan failed due to mod intervention and lack of fucks, respectively. However, the raid on Oniichan succeeded and went unnoticed until an Oniichan staff member saw the conversation about the raid on GETchan. The posts were deleted, but even more continued to be posted and the board was locked. Upon being unlocked, Oniichan was met with another raid from Nuchan. This time the raid went completely unnoticed and every thread was wiped off the board. Three days (and only five posts) later, the Oniichan staff announced that the chan would be shutting down. In October, Dubschan shut down, leaving GETchan and /ref/ on their own.

Oniichan finally shut down in March of 2014, a year after the split. Four days after Oniichan's shutdown, GETchan expressed a desire to gain control of the chan. This was fulfilled on 5 April, 2014 and the chan was set back up under GETchan control. With this, the Oniichan conflict was declared over and the staff of GETchan began work on reuniting the two chans. GETchan and Oniichan were finally reunified on 30 January, 2015. The original domain for Oniichan, "getchan.org", was finally retired by the GETchan staff on 20 August, 2019, over 5 years after being acquired by GETchan. 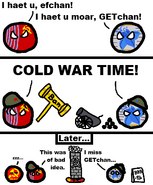 A chanball image explaining the beginning of the conflict 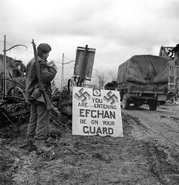 An anti-efchan propaganda poster
Add a photo to this gallery
Retrieved from "https://unitedchans.fandom.com/wiki/GETchan-efchan_conflict?oldid=5886"
Community content is available under CC-BY-SA unless otherwise noted.